I have had my Yahoo! Email account for at least eight years.  The internet was still relatively new for regular folks and through a painfully slow dial-up connection, I spent a fair amount of time learning about new technology, signing up for sweepstakes and signing up for emails.

This email account is no longer my primary address, but I keep it active, because it’s hard for me to let it go.  I also like to go in and see what kinds of messages land in the inbox.

This message I received the other day was a message that I assume I got as a part of some co-registration from some point in the late 90's. 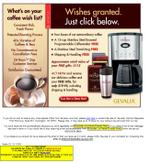 I rarely open these messages, maybe once a year or less, which means there probably  isn’t a lot of thought put into list hygiene or dropping dead weight by saying goodbye to subscribers aren't opening their messages.

The footer in this message definitely leaves something to be desired.  The entire footer is clickable and leads to the opt out page.  I guess that makes it easy... Talk about following the letter of the law.  Instead of telling me where I signed up the footer reads:

"You have received this advertisement because you have registered with (Publisher List Name Entered Here)."

The footer also contained a physical address, again, following the law, but the  font selected looked  like hieroglyphics.

The footer in this message should serve as a reminder to all email marketers to QA your message.  Including the footer. There is really no excuse  for messages  to be sent live with a fill-in-the-blank  that has not been filled in properly.

I'm not sure how I feel about all of the text in the footer being clickable.  It makes me feel like there is something not quite right.  Especially when there is a hyperlink in the footer.  That smells sort of  spammy.