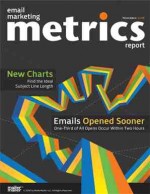 MailerMailer examined data from over 350 million emails in 21 different industries from the first six months of 2008. Here are some of the highlights of their report:

The full report will can be downloaded at http://www.mailermailer.com/metrics/