Things to Consider When Collecting Data via Social Signup

Dave Hendricks posted an interesting article on ClickZ titled "Owned Data, Paid Succes", in which he talks about the risks associated with using data gathering via social sign-in on your website.

Bringing owned data into paid media channels - sometimes referred to as data-onboarding - will revolutionize marketing like nothing seen before the invention of the Internet. But if you do not have rights to use "your" data in third-party channels, you are going to miss out on a big piece of the next big thing in interactive marketing: CRM retargeting.

You might ask, "How is my file not my owned data? I can email it. I can drop cookies on it and retarget it. I can even send terrestrial mail to it. That sounds like it's mine."

The data you collect via social signup is yours...to some extent.

The Upside and Downside of Gmail’s Native Unsubscribe Link

Now any sender that includes the list-unsubscribe header in their emails will have Gmail’s native unsubscribe link show up next to their sender name when an email is opened, whereas previously the only senders who were able to benefit from this offering were those with stellar reputations—which were the ones who needed it the least.

In this article, Chad White looks at the pros and cons of this new functionality and how best to use it.

My favorite reads of the past few weeks

A couple of articles I enjoyed reading recently:

I got an email from the folks over at Moosend this morning with some interesting and fun email marketing stats they pulled from their system and I thought you might find them interesting as well :-) 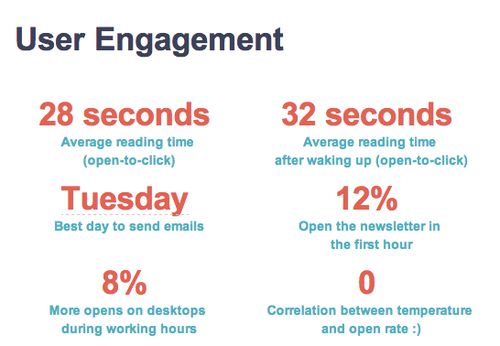